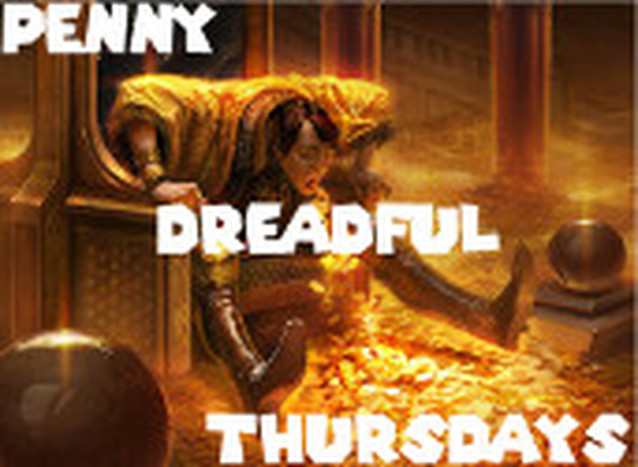 The official webpage for the Gatherling Penny Dreadful Thursdays tournament, brought to you by Cardhoarder!

Start time for the event is 7 PM EST, on Thursdays of course.

​Please join chat channel #PDT for round start confirmation and to interact with your fellow players!
Games will be played in "Getting Serious", only matches in this room will be considered valid.  Don't challenge your opponent.
Opponent will be shown at the beginning of the round in Gatherling "Player CP" on the bottom left of the page.
When creating your match, please include "PDT Round X vs (opponent's name here)" in the comments.

Door prize when available is given out to a lucky player who did not make top 8 and completed the swiss rounds.

This tournament also tracks how well everyone plays throughout the season.  You earn points for doing the following:

Entering the tournament: 2 point
Playing in a round: 1 point
Winning a round: 3 points
Receiving a bye: 1 point

On top of that, if you place in the top 8, you gain additional points.

On the second to last tournament in a given season, the season leaderboard ends, and the top 8 players of the season are rewarded for their efforts with additional bot credit as follows:

In the result of multiple players being tied for the same place, those players split the prize(s) they are qualified for.

The last tournament of any given season will be a special season championship event. It will be like any other event except there will be no door prize (I'd like to keep the door prize for regular season tournaments), and the top 8 performers of the season will get a round 1 bye for their dedication to those that took the time to be there for as many events they could, and for their strong performance and hard work to the format.  If a player eligible for a bye for the season championship doesn't show up for the tournament, their bye will be applied to the next tournament they are registered in.

This tournament will start at 7 PM EST due to such a large turnout.

In this tournament, draws ARE ALLOWED. Both you and your opponent will need to tell me personally that you are drawing. No where else will it be allowed. You must tell me you want to draw 5 mins after round start to give you enough time to make a game if you do not agree, no later.

All players need to be in the #PDT channel as long as they are in the tournament. If you miss when the round starts, and your opponent doesn't show up due to missing the round start announcement, after 10 minutes (15 minutes for top 8), you can report 2-0 in your favor.  Please message me declaring a no-show before entering the result.  The responsibility of creating/joining your matches is on you. If there is a problem, please contact me personally.

I know we get a huge amount of people signing up right at the last minute, but late entries will not be allowed. Please register your deck at least 4 hours prior to the tournament start time to cover illegal decklists and so on.  Any illegal/incomplete lists at that point will be removed which will result in being dropped!

If you are still playing in the tournament, you need to be in the chat channel. If you are going to be afk for a long period of time, and may miss your next round, I need you to tell me via PM AND in the chat channel. Do NOT post in Discord. If you miss the deadline to start your match, and disappear for the entire match length and have not told me, you will be dropped from the tournament at that time for the fairness of the other matches.  Any prizes you may have earned from top 8 WILL still be granted to you.

I'm sure a lot of you already do this, but if someone doesn't show up, and they haven't messaged myself, please message them to make sure everything is alright. If someone messages me that they are going to be late, I will inform you that they have already said so. On top of that, if you are going to be afk for a long period at the beginning of the round or beyond 10 minutes, please tell your opponent as well as myself. The free win time is for people who take no effort to contact anyone. I'm sure no one does this, but I have to say it in case it becomes a problem down the road, don't abuse the free win time.

​If a card a bugged, please report it here: https://docs.google.com/spreadsheets/d/16mTUqfEaL7NxVD8Sp7CnJ7uTvlk5PudAUQvVssU_HkE/edit#gid=0

Any bugged cards will be temporarily banned from the event until the bug is fixed.  This is so that no abuse can take place if it's a positive bug (a bug that makes the card better than in paper), or if it is a negative bug (card is worse than it should be if played in paper), doesn't frustrate newer players or people who are unaware of the bug.

If you wish to donate random promos/anything to the door prize or have any questions, feel free to message me on MTGO @ CHAOSBLACKDOOM. Thank you.